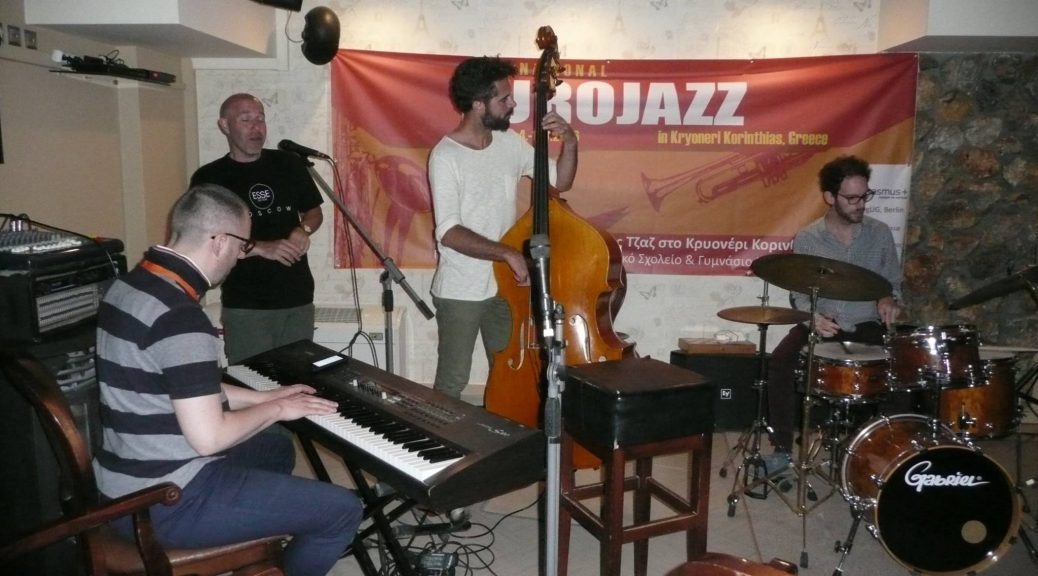 Music as a tool to battle for better future

This training seminar took place in Kryoneri – Korinthia, Greece between 4 & 11 July 2016. During those 8 days, 26 participants from the countries Greece, Finland, Italy, Spain, Germany, Austria, Slovakia and Czech Republic and worked together with the common theme. This seminar is one of the projects that resulted as a follow-up of the two previous Jazz Workshops, organised by the Greek association Filoxenia in July 2013 and July 2014.

Music is a great tool for bringing people together and an excellent way to bring people closer to other cultures as well. Music is a language were everybody speak at once, everybody can understand. Especially Jazz music gives a feeling of freedom, without limits (age, gender, race, etc.), where improvisation plays a central role.

During this project participants learned new methods, developed their skills in using music and they‘ve also got more information about the European programme Erasmus+ and intercultural activities. The current project offered also participants a chance to learn to cooperate in a multicultural team, to develop their personal competences, such as music skills, language skills, organisational skills and to learn about new working methods as well.  A tutors concert took place July 7, 2016 in the frame of the Kryoneri Cultural Week, attended by the local community.

A cultural visit in the city of Nafplio, the Environment Museum of Stymfalia, the Lechova monastery and the environmental footpath of Kryoneri have been also part of the programme. During the training seminar we used a variety of non-formal learning methods such as workshops, ice-breakers, energizers, team building activities, work in small groups, dialogue, reflection, music-concerts, jam sessions, etc.

This project has been supported by the European Commission – Programme Erasmus+ and has been co-ordinated by the organization Elisson gUG – Berlin (Germany).  This project had a big impact to the local community. The organizers in Germany and Greece are wishing to co-operate, for setting up similar projects in the future.

Many thanks to all partner organisations and the participants!